I look forward to getting to know you. If we have not met, allow me to introduce myself as I offer a brief autobiographical sketch:

I was born on August 3, 1966, the middle child of my parents, Dr. John (Blessed Memory) and Helen Gardikes. We attended the Annunciation Greek Orthodox Cathedral in Columbus, Ohio and have been active members since the early 1970’s. Over the years, my family and I have participated in various organizations and responsibilities: i.e. parish council, Annual Greek Festivals, Philoptochos, GOYA, choir, and acolyte. 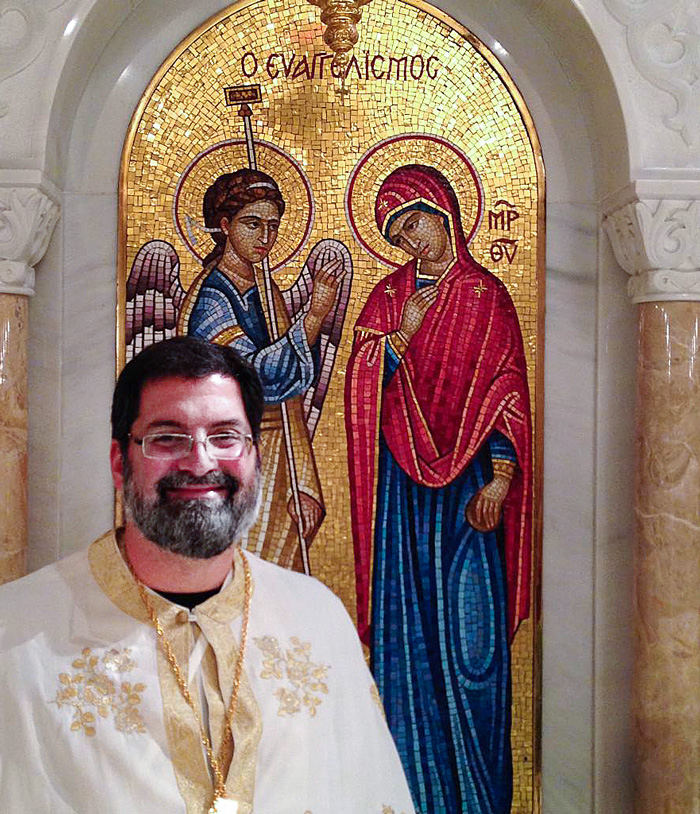 I entered Ohio State University in 1985 and graduated with a Bachelor’s degree in Business Administration in 1989. After graduation, I took a position with a major corporation as a sales and marketing manager.

On September 20, 1992, I was joined in the Sacrament of Marriage to my loving wife, (Sherri) Susanna Gardikes. The Lord blessed us with two wonderful boys, who are such a joy to our lives.

In the spring of 2001, I graduated from the Masters of Divinity Program at St. Vladimir’s Theological Seminary. I was ordained to the Deaconate by His Eminence Metropolitan MAXIMOS of Pittsburgh on August 4th, 2001 at St. Gregory Palamas Monastery (Haysville, Ohio), and to the Priesthood on January 26th, 2002 here at the Annunciation Greek Orthodox Cathedral in Columbus. Upon completing my studies at Holy Cross, I was assigned as associate pastor to the Annunciation Greek Orthodox Cathedral beginning June 1st, 2002.

At the request of His Eminence in June of 2005, I was assigned as the presiding priest of St Spyridon Greek Orthodox Church in Monessen, PA. On December 12, 2008, the Feast of St Spyridon, His Eminence bestowed the honor of Stavrophoros Economos. Nine months later, I was assigned as the Dean of the Metropolis Cathedral in Pittsburgh. Finally, to come full circle to the entrusted ministry at the Annunciation Greek Orthodox Cathedral which began on the 100 year anniversary celebration, September 30, 2012.

“But I say to you that hear: Love your enemies, do good to those who hate you, bless those who curse you, pray for those who mistreat you.” (Luke 6:27-28)

Blessings in the Lord! I am so happy that you found our community!

I was raised as a Protestant Christian until the time I was twelve. About that time, I discovered Orthodoxy (with the help of my father) and attended my first Divine Liturgy at the Annunciation Greek Orthodox Cathedral, here in Columbus, Ohio. I felt a power and a grace in Orthodoxy that I had never known before. I fell in love with the Faith and decided immediately to pursue entry into the Orthodox Church. Under the loving guidance of my Spiritual Father and Confessor, Fr. John Stavropoulos, I underwent Catechism (i.e., religious instruction) and was eventually Chrismated in the Church.

Since that time, I have served as an Acolyte, Ecclesiarch, Chanter, Church Tour Guide and Adult Catechist. This community raised me — and to serve it now as Assistant Priest is a greater blessing than I could ever have wished for!

I earned my degree in Philosophy from The Ohio State University, where I spent considerable time studying Ancient and Medieval philosophy. I maintain a particular fondness for the Jewish, Christian and Islamic commentators on Aristotle. I found and still find them inspiring — not because I agreed with them on all points, of course, but because I found many of their insights valuable for my own life in Christ.

I met my wife, Presvytera Lisa (Maria), during those years and we became fast friends. I loved how she challenged me and I will always cherish her friendship, counsel and guidance. May God reward her constant love!

After my undergraduate education, I spent several years first as a bookseller, then as a manager at the same bookstore. My experience there taught me a great deal — far too much to describe in a few words. I will say, however, that time spent in service to others, whether they be family, friends and/or strangers — such as my customers were at first! — is never time wasted.

When my wife and I discerned that our calling was to ministry in the Church, we applied to Holy Cross School of Theology in Brookline, Massachusetts, where I studied for four years and then worked for an additional year. Our time there was impactful both spiritually, intellectually and emotionally. The school became a kind of second home for us and we will always remember it fondly.

After we left the School, we were assigned to the Annunciation Cathedral, where I grew up and where Presvytera also attended. I was ordained there by Metropolitan SAVAS of Pittsburgh, first to the Diaconate on October 8th, 2022, and then to the Priesthood on November 20th, 2022.

In the meantime, may God — Who made you and fashioned you — bless you and keep you always!

The Mission as Dean:
The mission is to uphold the Great commission of our Lord and Savior Jesus Christ, “to make disciples of all nations, baptizing them in the name of the Father and of the Son and of the Holy Spirit” (Mt. 28:19), teaching them to observe the commandments. Man’s vocation in Christ as far as his soul is concerned, is to bring the body and all of creation into relationship with God. My hope is to always do God’s will and be a vessel in whatever capacity. As a priest, I believe one must observe the needs of the community and then create situations to connect with the people, and to bring the remembrance of Christ into their hearts. Connections are made through the services, being present at meetings, functions, social activities, visitations, church organizations and creative situations, which give opportunity to preach the Gospel without discrimination.

As you surf through the web site pages, I also hope that you will remember that the Christian community is like every other part of life. To paraphrase scripture, we reap what we sow. Therefore, the greater your involvement, commitment and support, the greater will be the benefit to you and our church. The greater your commitment and time to our Lord and Savior Jesus Christ, the closer your relationship will be with Him. I look forward as we encourage one another to continually grow in the faith of our Lord and Savior Jesus Christ for the building up of His Church. Glory to You O Lord, Glory to You!